Home » News » From Yale Farm, a culture of sustainability has sprouted

From Yale Farm, a culture of sustainability has sprouted 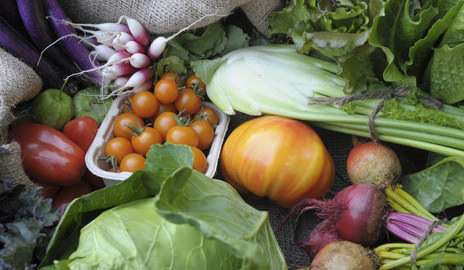 In 2003, a pioneering group of Yale undergraduates cleared tangled brush from a long-neglected acre about a mile north of Central Campus, determined to raise both vegetables and the consciousness of their fellow students.

Today that acre is a meticulously tended plot planted with diverse crops; the space also features a brick oven and wooden pavilion, and boasts free-range hens and its own beehive. Known as the Yale Farm, it serves Yale students and the New Haven community as an outdoor classroom, providing opportunities for immersive, interactive learning.

While today it is not unusual to find heirloom tomatoes and purple carrots sprouting amid the asphalt-and-concrete urban environment, a decade ago city gardening was a rarity. Indeed, the sustainable food movement, which spurred the growth of urban gardens, was barely in its infancy.

The members of the student group “Food for the Earth,” who first broke ground for the garden, had taken a course on environmental health and policy taught by Professor John Wargo in the Yale School of Forestry & Environmental Studies. Having learned about the effects of pesticide use on human health and the health of the planet, the students started to lobby for organic food to be served in the Yale dining halls. In fact, part of group’s impetus for starting the garden was to introduce their fellow students to the lasting benefits of growing and eating fresh, whole foods.

About that time Alice Waters, a renowned restaurateur and advocate of fresh, locally-sourced food, became a Yale parent and added her voice to the chorus of students already clamoring to be served sustainable food. She quickly won the support of Yale President Richard C. Levin, and when “Food for the Earth” scooped up the first shovel-full of soil from under the cleared brambles of Farnam Gardens, it was with the blessings and endorsement of the Yale administration.

Shortly thereafter, Yale hired Josh Viertel, a Harvard graduate with experience as a world-traveled organic farmer, to oversee the farm on Edwards Street and grow the project into a more comprehensive program. He was shortly joined by Melina Shannon-Dipietro, also a Harvard graduate; together they formed the core leadership of the program for its first five years.

The Yale Sustainable Food Project has vastly expanded its operations since the garden began. It hosts food-world luminaries like author Michael Pollen and Slow Food founder Carlo Petrini as part of a yearly speaker series; sponsors conferences; screens documentary films about the food system and the new food movement; fosters opportunities for students to meet with the local farmers; and links students with the many food-related courses that are offered across the academic curriculum — from the biology of anthropology to the history of food and cuisine.

Academic opportunities around food have increased dramatically as the Sustainable Food Project has urged students and professors to consider the ways in which the food system affects subjects as diverse as culture, policy, economics, and public health. Undergraduates majoring in environmental studies can now concentrate in food and agriculture, and students from a variety of disciplines have found ways to work their interest in food into their senior projects.

While the Sustainable Food Project is a multi-faceted program, the Yale Farm remains at its center. It is a place for students to learn and to teach, gaining academic insight as well as practical knowledge. Paid student interns help run open volunteer work hours, welcoming visitors to the space and engaging them in the work of sustainable agriculture. These students are part of a community of interns who do vital work for the project — tilling, sowing seeds, weeding, harvesting, and selling their produce at the Wooster Square Farmers Market. The students also handle everything from taking photographs of events to making pizza in an on-site wood-fired oven to running a program for visiting public school students. It is a crucial piece of the Sustainable Food Project’s philosophy to learn by doing — and then by sharing those new skills with others.

The Yale Farm is a living space all winter long, with salad greens grown in plastic-covered hoophouses. In the late spring, the greens are replaced by the tomatoes that will produce through early September, when the students return to campus. The agricultural calendar turns with the academic one, the work of the farm complimenting and supplementing that of the classroom. As the students who work, learn and eat there attest, the Yale Farm is a place to celebrate the joy of raising and preparing the food we eat together.