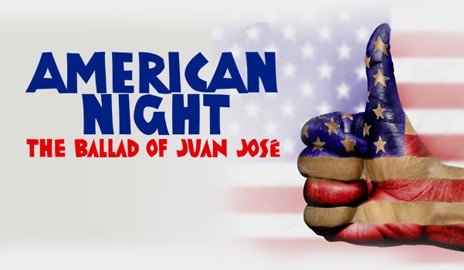 In the opening play in the Yale Rep’s 2012-2013 season, Juan José’s obsession to pass his citizenship exam takes him on a fantastical odyssey through U.S. history, guided by a handful of unsung citizens who made courageous choices in some of the country’s toughest times.

“American Night: The Ballad of Juan José” was written by Richard Montoya and directed by Shana Cooper. Developed by Culture Clash and Jo Bonney, the play is a “provocative, irreverent, and hilarious mix of past and present, stereotype and truth,” according to the organizers. It will be staged Sept. 21-Oct. 13 at the University Theatre, 222 York St. Opening night is Thursday, Sept. 27.

Performances are at 8 p.m. Tuesday-Saturday, with additional 2 p.m. matinees on Saturdays, Sept. 29, Oct. 6 (an open-captioned performance), and Oct. 13 (an audio-described show), and on Wednesday, Oct. 3. There is one Monday performance, on Sept. 24. Other special events include a 7 p.m. reception for graduate students on Saturday, Sept. 22; a reception for senior citizens at 1 p.m. on Wednesday, Oct. 3; Talk Back conversations with members of the cast and crew following the Saturday matinee shows on Sept. 29 and Oct. 6; and Post-Show Conversations on Monday, Sept. 24, Tuesday, Oct. 2; Thursday, Oct. 4, and Saturday, Oct. 6.